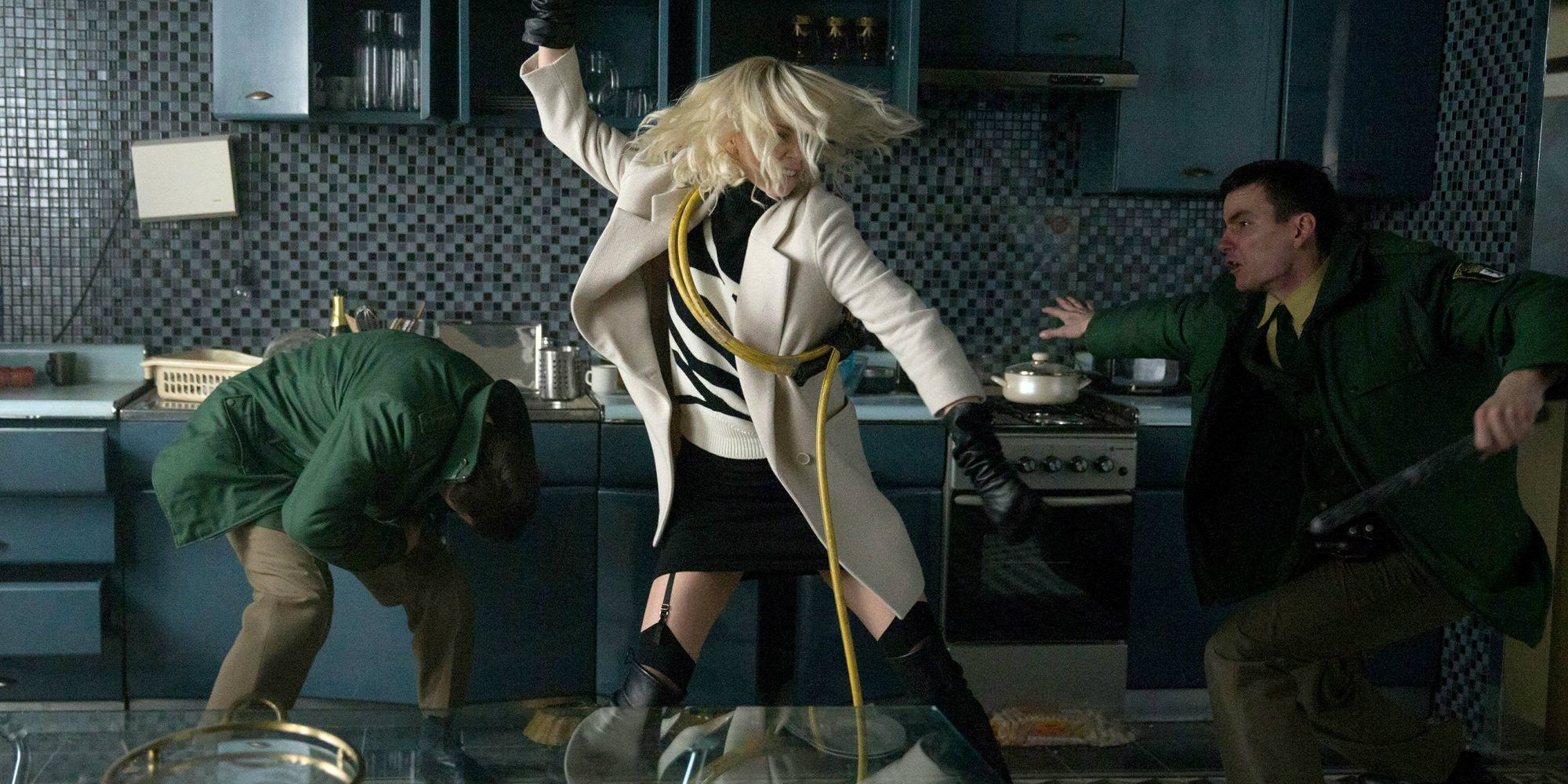 Atomic Blonde is the 2nd feature film from stunt-coordinator turned director David Leitch, who will soon turn his attention next to the sequel of the highly successful Deadpool and while Atomic is certainly above average in terms of action, I ended up leaving the movie certain I’d never desire to watch it again. Sadly it’s a case of neon-drenched 80’s style over substance.
The extremely talented and dangerously beautiful Charlize Theron, who showed she is definitely capable of handling an action heavy role like this in Mad Max: Fury Road plays Lorraine Broughton, a top-level spy for MI6 who is sent over to Berlin just before the Berlin Wall is set to collapse to recover the film’s obvious MacGuffin in the form of a wristwatch containing highly sensitive information regarding active agents in the Soviet Union. And that’s basically it. There’s very little depth to the plot and sadly I found myself not really caring about any of the characters as cool as they may be. Lorraine is a mysterious and effective badass but I literally learned nothing about who she was as a person. Character motivations are often unclear and everyone is constantly betraying each other among the many contrived twists of the film.

The movie uses an increasingly common plot structure in modern film with Lorraine being questioned about the events of her adventure which we keep flashing back to. This takes all tension out of the film as we know Lorraine survives the events of the film and the interview scenes themselves aren’t all that interesting and slows the whole movie down. I feel that one final re-write and edit would’ve really helped.
James McAvoy gives a typically spirited performance as David Percival, a suspicious agent who is perhaps enjoying his time in Berlin a bit too much, who helps Lorraine with her mission but there are many underutilized supporting actors. The movie commits the sin of wasting John Goodman as well as Sofia Boutella and Eddie Marsan who barely feature or contribute to the narrative.
The movie itself is shot very well with many beautiful shots, soaked in neon lights in a grubby, punk looking Berlin but the movie is unfortunately over-saturated with its soundtrack of 80’s pop hits. Much like the dreadful Suicide Squad, there is a new song playing practically every 5 minutes and while some songs can work and contribute to a scene (it is a fantastically groovy soundtrack) they mostly come off as a distraction.
The best scene in the movie features a delightful long take of Lorraine brutally battling her way down a stairwell using whatever weapons she can get her hands on and then follows her onto the streets in an impressive car chase. This scene was what I was hoping for in the movie but one amazing scene was just not enough for me to become endeared.

While disappointing, Atomic Blonde is still a fairly enjoyable and mindless action movie and I am still confident about Leitch directing Deadpool 2. That franchise seems more suited to his skill set and John Wick is still on the best modern action movies I’ve seen.
I hope Theron isn’t deterred from making more action movies as she is totally convincing as Lorraine and you can tell she did a lot of preparation for this role. I wouldn’t be totally against an Atomic Blonde sequel, one with a script that is worthy of its performances.

That’s it! Until next time…