The latest adaptation of Stephen King’s novel has been released, and it has caused quite the storm. Is it any good? Read my review of it.

Young Georgie goes out to play in the rain with his paper boat, made by his big brother Bill. The boat drifts into a storm drain and, in a scene that inspired a million memes, when he looks into it, a clown waiting for him. Pennywise The Dancing Clown has Georgie’s boat, and has a playful, then sinister, conversation. He offers the boat back to Georgie – and then bites his arm off and drags him into the storm drain.

As the school year comes to an end, Bill is obsessed with finding his brother, and plans to spend the summer looking for him in the Barrens, a run-off for the sewer system around Derry. His friends are understandably less willing to spend their summer doing that, but when they start seeing scary visions, they start to realise there is something else going on in Derry.

At the same time, Beverley is struggling with the all to real horrors of school bullying and abuse from her father. Despite a reputation as a slut, she’s is actually just an ordinary girl, and she shows some kindness to Ben, an overweight kid who hasn’t made any friends after moving to the school. She helps them out when they need some supplies from the pharmacy. When they rescue new kid (on the block) Ben and abattoir-working Mike from Henry Bowers and his gang of bullies, they tell them about more tragic events from Derry’s past. With Ben having spent a lot of time in the library, and Mike having a knowledge passed down through his family of outsiders, the Losers (as they call themselves) start putting together the strange happenings around Derry, and start to get to the secret behind Pennywise. Can they stop the monsters – real and supernatural – that are haunting Derry, before it is too late? 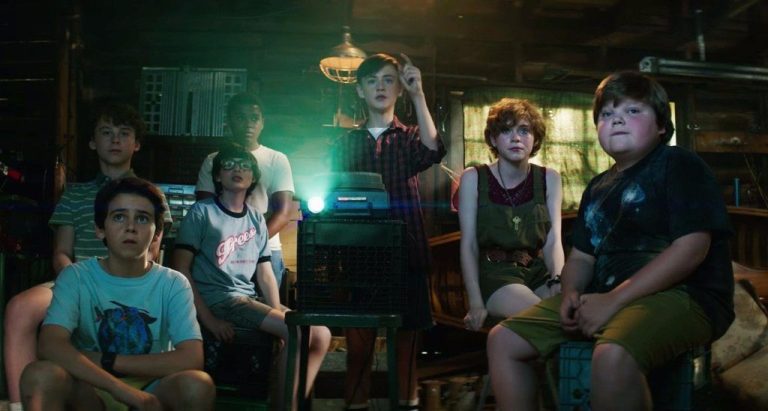 IT might not be the outright scariest film I see this year, but it might be one of the best films. It almost feels unfair to classify it as a horror film, because that brings certain expectations that to be honest the film never tries to fulfill. There are plenty of jumps, but the best scenes in the film aren’t based on the surprise factor. One character walks into a room with a strange looking painting on the wall, and from that moment on you know how the scene will play out – but it is still creepy and satisfying.

There are a few issues with the film. Getting all seven members of the Losers Club together takes a long time, and fitting in each character means that some get short changed. Mike only really has two scenes before the final third, and feels underdeveloped. Also, Pennywise the Dancing Clown might be slightly over-used through the course of the film, but Bill Skarsgard does a very good job with the role. The evil clown motif is a pretty tired one in film (probably due to the countless lazy imitations spawned from Tim Curry’s performance in the 1990 version) but being a product of the children’s (and Derry’s) fears, rather than actually just being a scary man in face paint, Pennywise works.

And probably the best thing about this film? You forget that the main characters are all played by child actors. A fantastic effort from all involved, especially Mama director Andres Mischietti. There are even subtle hints to stories that will be developed in any potential sequel. Go see IT… you won’t regret it.