Penning the script of Sicario and Hell or High Water, two of my favourite movies of 2015 and 2016 respectively, Taylor Sheridan sits for the first time in the director’s chair to helm the third and final film of his American Frontier trilogy and once again he delivers a powerful, character driven drama that leaves you in awe by the time the credits start to roll. Predictably, Sheridan is not quite on the level of more experienced directors such as David Mackenzie or Denis Villeneuve but he has shown he has the potential to become an ambitious new talent on the big screen and as far as debuts go this is very promising.
As a writer he is certainly one of the best. His refusal to utilize obvious exposition instead having real, sympathetic characters with realistic dialogue is masterfully handled and a great lesson for those wishing to write without explaining every single detail to the audience. This is a sobering, bleak drama about grief, loss and isolation with just the right amount of heart.

Vast icy landscapes really capture the stark emptiness of the Wind River Indian Reservation in Wyoming where this murder mystery is set and the wintry location plays an important role, almost becoming a character in itself.
The story begins with a beautifully still and snowy plain soaked in moonlight. The serene stillness is disturbed however by a young woman running frantically barefoot through the snowfall covered in blood. Her desperation is obvious but we have no idea where she came from and that’s where the mystery begins.
Wildlife Service agent and hunter Cory Lambert (Jeremy Renner) has strong ties to the land and his tragic background compels him to help the young and naïve FBI agent Jane Banner (Elizabeth Olsen) who is sent over with scare resources to help solve the case of the young woman who is eventually found frozen to death by Lambert as he hunts for a group of lions that have been feasting upon the local cattle using his impressive tracking skills. The two, helped by Tribal Police Chief Ben and his unfortunately small investigative team slowly unravel the circumstances that would lead the tragically deceased Natalie to be found so far from civilisation having clearly been assaulted, both physically and sexually.
I’ll admit, I’ve never been the biggest Jeremy Renner fan. He’s obviously a talented actor but I’d seen few roles of his that really captivated me, until Wind River that is. You’d be amazed what a great script can do for an actor. Renner is very understated and there is some subtly powerful acting here. “Luck don’t live out here” he wearily tells Jane regarding the reservation and you can feel all of his devastating past just from facial expressions alone and he carries all his emotional baggage with a commendable strength. He is a man who has become adept at surviving because he’s fully aware of what the alternative is.

Elizabeth Olsen plays the role of the rookie agent Banner impressively and her lack of preparation for the environment make us sympathetic for her and also highlights her inexperience. She is generally looked down upon by the locals, having to borrow thermal clothing from a resident who is reluctant to help which alludes to the bigger picture of the Native Americans having been discriminated against for centuries and suffering terribly at the hands of American imperialism.
One of the best supporting performances in recent times comes from Gil Birmingham, collaborating once again with Sheridan having played Jeff Bridges wise-cracking partner in Hell or High Water and here he plays Martin, the father of the murdered woman and his performance is so tragically devastating I defy anyone not to be moved by the raw pain of his character. “I’m tired, Corey. I’m just so tired of fighting this life.” he despondently says to a man who fully understands his grief and who vows to seek justice for young Natalie. 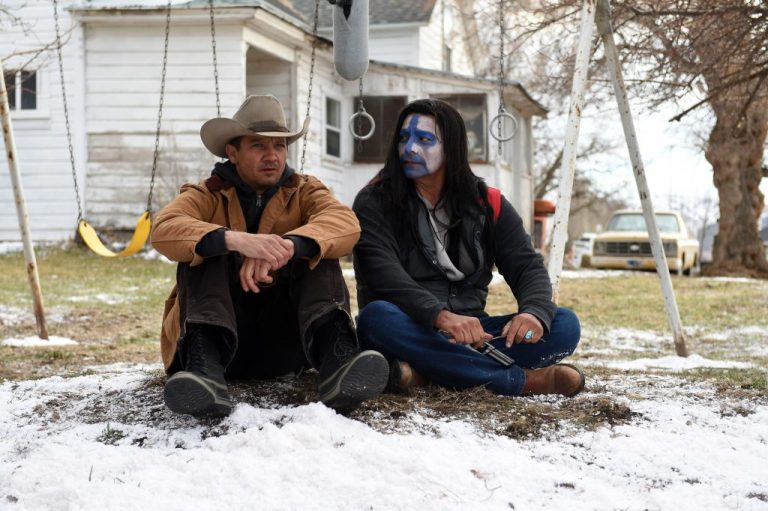 There is also great support from Oscar-nominated Graham Greene as Ben the no-nonsense Tribal Police Chief and the Punisher himself Jon Bernthal (Is there anything he isn’t in these days?) in a role much more sensitive and emotional that we’ve seen him recently in movies such as Baby Driver or Sicario and it’s great to see him add another dimension to the type of character he can play. He is surely becoming one of my favourite supporting actors.
Overall this is definitely a slow methodical thriller that may not appease fans of faster paced affairs but River is not completely devoid of action. The third act builds up anticipation throughout and duly delivers a tense showdown of sorts at the end and a truly cathartic if still ultimately melancholic ending which results in some on-screen text which really shocked me and I know will shock many.
Wind River has risen straight into my top ten movies of the year and I hope the mass audiences manage to check it out before it goes. I’m excited to see what Sheridan does next and I hope he gives directing another go because he has proved himself to be more than up to the task.