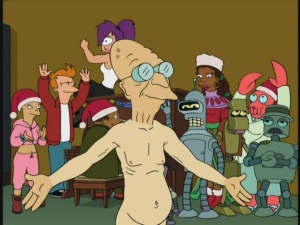 Futurama was an animated show created by Matt Groening of The Simpsons fame. It followed the adventures of Philip J. Fry, a New York pizza delivery boy who fell into a stasis booth on New Year’s Eve 1999, and awoke a thousand years later. There he meets his only living relative (a nephew thirty generations removed) Professor Farnsworth, a mad scientist and owner of Planet Express delivery service, and joins the eccentric delivery crew that includes the love of his life Leela and the foul-mouthed robot Bender.

Futurama ran for 4 seasons originally on Fox, before continuing with four straight to DVD films. It was then picked up by Comedy Central for two more full seasons, bring a total of 140 episodes. Due to this stop-start nature, it actually produced four touching, heart breaking finales. In this article though, I’m going to look at the three Christmas (or should that be Xmas) episodes this much missed show produced.

The Planet Express Crew head off for a skiing trip for X-mas (as it has been renamed), which makes Fry miss the traditional 20th Century Christmas celebrations, since this is the first one he will spend in the World of Tomorrow. The gang decide to go all out to make sure Fry enjoys himself, and so set about celebrating Xmas. This includes getting a traditional Christmas palm tree, as pine trees had gone extinct centuries before.

Leela is also feeling lonely, being an orphan and all, and gets upset with Fry selfishly only thinking about himself. (We’re still early on in Futurama, so Fry is still in his puppy dog crush on Leela phase). To make amends, Fry goes out to find her the perfect present – and so is faced with the choice of either one $500 parrot or 500 $1 stink lizards (“girls like swarms of lizards, right?”). He has to get home before nightfall though, because that is when Robot Santa Claus comes to town. Robot Santa Claus was built in 2801 by the Friendly Robot Company, but had his niceness levels set too high. This leads to him going on a murderous spree every Xmas Eve!

After seeing a news report about down and out Robots getting free alcohol for Christmas (they need alcohol for their operating systems), Bender goes down to the drop in centre to help out. Obviously, Bender dresses as a vagrant and gets drunk instead (Tinny Tim asking “please sir, can I have some booze” is a brilliant, cross-Dickensian line) and later goes out carolling with his new friends, using it as a pretense to rob the householders.

This all leads to the Planet Express Crew having an explosive stand-off with Santa Claus – all apart from Zoidberg, who had been good that year! They all survive, and gather round the piano to sing a traditional song!

But Santa is not put off, promising to back  “you least expect it: NEXT XMAS!”.

A bit like Community, you could probably argue that the first Christmas episode is the first great episode of Futurama, although even at the start of the second season it was still morphing into the show it would become. It brings to mind the early seasons of Family Guy, although the Seth MacFarlane show went more vulgar, while Futurama refined its humour and more high brow than ever – how many shows have three PhDs and seven masters degrees on its writing staff?

There are loads of great little lines dropped into “Xmas Story” and a whole unseen subplot with Amy and Hermes both selling their hair to wigmakers to buy each other combs. Also, if you’re in the middle of watching a whole bunch of Christmas films, there are references to plenty of Christmas classics.

An “Xmas Story” is a brilliant episode. A year later, Robot Santa did reappear, although this time the Planet Express Crew go to him…

Having learnt their lesson from the previous Xmas, the Planet Express Crew are on full lock down to survive Robot Santa’s visit. The Professor has one last job for them though, which is to deliver kid’s Xmas letters to  Santa in his fortress on Neptune (obviously). Fry decides that the time has come for him to turn Xmas back into Christmas, which involves them taking on Robot Santa on his own turf. After Leela’s paradox fails (“my head was built with paradox-absorbing crumple-zones”) it all seems doomed for the gang when Robot Santa grabs the ship and stops it taking off. But the engine melts the ice around him and he is trapped when it refreezes. Who could possible replace Santa? 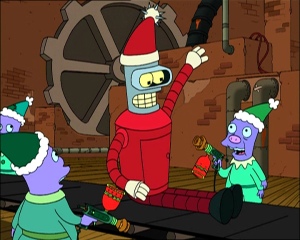 Bender takes over the role of Robot Santa – what could possible go wrong? – but when he gets to Earth he is arrested and charged with crimes against humanity, thanks to Robot Santa’s two hundred year murderous spree of terror. He is sentenced to dismemberment, and the Planet Express Crew try to bring the original Robot Santa back from Neptune, but he escapes. A last-ditch Spartacus attempt to save Bender by pretending to all be Santa – apart from Zoidberg, who is Santa’s friend Jesus – is unsuccessful, but Robot Santa rescues Bender and the two of them complete the traditional Xmas murderous rampage!

It’s an unconventional way to bring people together, but huddled together waiting to die, Fry realises that he has succeeded in bringing back the spirit of Christmas.

“A Tale Of Two Santas” is a brilliant festive episode, and a brilliant piece of animation. Although John Goodman didn’t return to voice Robot Santa, John DiMaggio did a great job. And anytime the Robot Devil appears it’s a bonus, as well as giving me a chance to post one of my favourite moments in Futurama:

If you can’t watch videos, the Robot Devil wants Bender to offer his first born son in exchange for his Robot Army, to which Bender, well…

That would be it for festive episodes in the original run, but they had one last go at it a few years later.

So, after a quiet cancellation and rebirth on Comedy Central, Futurama did another Christmas episode. This time the producers went for three non-canon stories (think The Simpsons “Treehouse of Horrors”) an idea they had used for “Anthology of Interest” episodes in the original run. Actually, the “holiday” moniker is actually appropriate for once, as the three stories are based around corrupted future versions of Christmas, Hanukkah, and Kwanzaa, and all sponsored by…

It’s Xmas Eve again in New New York, and the Planet Express Crew are attacked by Robot Santa, which makes the gang decide to try to bring the pine tree back from extinction to have a more traditional Xmas. This leads to the gang heading to the Seed Vault in Norway: 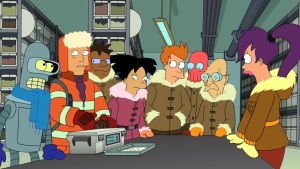 Unfortunately, the seeds have been contaminated by biological weapons, and the pine trees soon spread all over the globe. This leads to a beautiful, more natural planet, but also to an oxygen rich atmosphere that burns to a crisp when Bender lights a cigar. Bite his shiny metal ass indeed. Robot Santa says now that everyone is dead his job is done… but to stay tuned for more holiday hilarity!

The second part of the episode sees Bender wanting everyone to celebrate Robanukah, the made up holiday from way back in the first season. One of the traditions is that fembots wrestle in oil for six and a half weeks.

He needs the Crew to get more oil – they only have enough for four and a half weeks! – which means they need to drill deeper and deeper. The Planet Express Ship is eventually crushed by the pressure, but Bender survives, and comes back up to the surface 500 million years later to find a Robanukah miracle! The fembots are still wrestling! Bender wishes everyone a Happy Robanukah and states that there is more hilarity to come…

The final part has Hermes and his family take centre stage. The Planet Express crew visit him to celebrate Kwanzaa. LaBarbara finds out that they do not have any beeswax candlesdue to a blood sucking mites killing off all of the bees on Earth. They go to the space beehive, but find that it too has been attacked by mites. Hermes spreads goodwill to the drones, which leads to them killing the mites… but unfortunately… 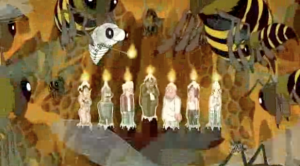 the bees also encase the crew in wax to feed their young – another happy ending for the crew! Al Gore’s head closes out the show (with one last plug for Gunderson’s Unshelled Nuts).

The final Futurama Christmas show is a departure from the previous ones, and feels quite similar to other non-canon animation episodes, like the Treehouse of Horrors episodes of The Simpsons. It references previous episodes of the show, and also plays to the strange traditions that defines our holidays – especially when they are pushed a thousand years into the future.

This is definitely the third episode in terms of quality. Adding songs to the episode, and making it non-canon, definitely allows it to be more festive, but the first two Christmas episodes are of such a high quality it just doesn’t quite live up to the expectations.

And so, that is it for the Futurama Christmas episodes. Futurama was a show that when it was good, it was very, very good, and who knows, maybe one day it will be back.

Now that would be an X-mas miracle.

PS. Robot Santa did also appear in Bender’s Big Score (the first movie) alongside Kwanzaa-bot and the Hanukkah Zombie, to help the crew prepare to take back Earth from the Scammer Aliens. Although that wasn’t really Christmas related, as a treat for reading all the way to the end, here’s the song “This Trinity’s Going To War” from that film:

PPS. ALL GLORY TO THE HYPNOTOAD!

A previous version of this article appeared on thesnootyushers.com in December 2016.