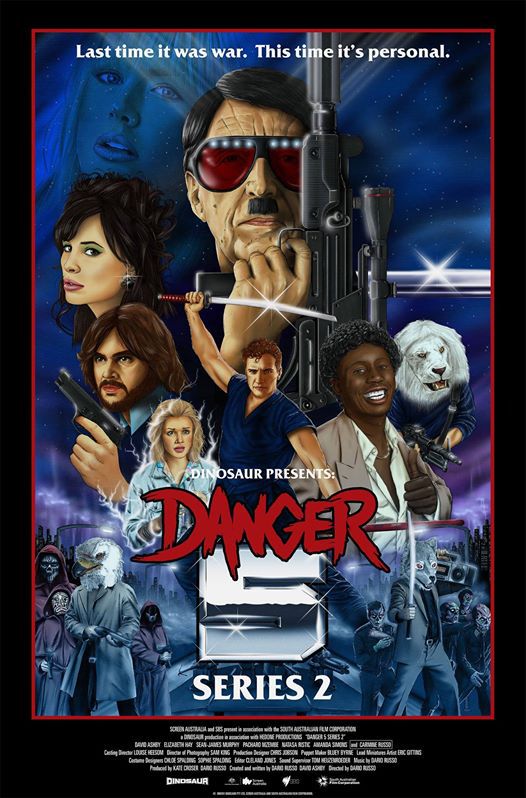 What would happen if a group international spies spent the 1960s trying to kill Adolf Hitler, only to discover he had somehow survived their assassination attempt and was going to take over Christmas? Did I mention their leader is still an eagle? And now it was the cocaine-fuelled, synthesizer-scored, neon-filled 1980s? Allow me to present to you, the Christmas-filled Season 2 of…

First of all, there will be some spoilers in this review. Season 1 of Danger 5 is a very funny spoof of 60s spy movies, like a live action Thunderbirds. It was so funny, wacky, and charming that I started telling everyone about it. What would Dario Russo and David Ashby do with a second season? How do they keep their running jokes fresh? Will they be able to keep the group dynamic interesting? Well, just check out the trailer:

Naturally, they kill off their boss The Colonel in the very first scene, leaving the team to get back together by chance, gunned down by Hitler (disguised as Santa) and his assistant Carlos Mendes (who is a wolf-headed man).

And there is also a chnge to the dynamic of the team. Can you spot the difference between the team from season 1:

And the team from season 2:

That’s right – Clare and Tucker are holding hands! They get married in episode 1. Congratulations to the happy couple, I’m sure they will have a long and happy marriage. You might also notice that Pierre is played by a totally different actor! Aldo Mignone was unavailable for filming the second season, so Pacharo Mzembe was cast in his place. Brilliantly, it is not referenced at all in the show. Neither is the fact that Pierre’s housekeeper, McKenzie, is a Japanese-speaking lion-man, and he becomes a new member of the team, taking on some of The Colonel’s duties when it comes to backing up Danger 5.

It takes a boatload of confidence to change the very fabric of your show like that. Russo and Ashby could easily have mined the 60s setting for more material, and played out the relationships between the team members as they were, whilst continuing with the one off, Nazi-of-the-week stories. Instead, the parodies move to 80s movies, and nearly all of the season 1 recurring jokes are jettisoned (there is still some fantastically unsubtle product placement, with incredibly inappropriate toy adverts at the end of each episode). But most impressively of all, the season basically plays as one long story line, making it almost impossible not to binge watch.

When the gang gets back together in Buenos Aires, they discover President Peron is investigating a schoolgirl in Chicago, which leads to episode 2 being a high school parody, and introduces a new kid to the school:

This is probably my favourite episode of the lot, as Johnny Hitler (who, as one of the pupils points out, looks like “an old Italian dude pretending to be an even older German dude”) becomes the most popular kid in school, just in time for the Christmas Dance, when he will become the King of Christmas. Undercover Pierre and Ilsa (the wonderful Natasa Ristic) win the vote however, causing Hitler to go on a murderous spree, including the required 80s movie naked shower scene, with a typically bonkers Danger 5 twist

The Danger 5 team are blamed for the crimes, especially when the investigating detective arrives on the scene:

Episode 3 is a brilliant police parody, especially as all-American Jackson (David Ashby) is captured by the Metro City P.D., who think he has “gone commie”. This leads to Hitler facing a mutiny from his underlings, who have taken over the Vatican and plan on using religion to take over the world (plus they really hate dogs) starting with episodes 4’s 81st Christmas Disco Mass.

The Danger 5 team manage to put a stop to this, and finally kill Hitler… who promptly kills the Devil and in ep. 5 and leads an army of Nazi zombies back to find Holly (Elizabeth Hay), the schoolgirl from episode 2. She has been kidnapped and taken to USSR-Land (a bizarre Soviet Disneyland) by Nikita Khrushchev (who is Ilsa’s husband). Zombie Hitler’s ghost then ends up in a teddy bear, and then eventually Holly, leading to them the rollercoaster – a dead giveaway, as a”only Hitler likes rollercoasters”. When reaching 88mph, Hitler-Holly goes back in time, meaning the Danger 5 team have to drink Pierre’s time-travel cocktail – with mozzarella – to go after him.

Episode 6 takes the team back to World War 2, specifically the last Christmas of the war, as the original Danger 5 team (with original haircuts, original 60s music, and original Pierre!) are rescuing The Colonel from Hitler, who is using his Nazifier machine to suck the soul out of young Aryan women and grant him immortality.

He finds out it will take 18 years to grow a pure Aryan from an embryo – and the embryo turns out to be Holly! Hitler Holly gets into the Nazifier and transfers her spirit (which is actually Hitler’s spirit) to Hitler, giving him immortality. The Danger 5 team destroy his base and return to the modern time to find that the immortal Hitler has become Boss Hitler!

Episode 7 sees the gang fight through Hitlerland, a dystopian alternate future, and head into space to fight Boss Hitler, culminating a seasons worth of storylines.

Season 2 of Danger 5 is a brilliant piece of work. There are new running jokes established, there are so many visual gags (the reason for so many pictures and gifs in this review), and finally, a great action-comedy performance from Sean James Murphy, who plays Tucker.

Danger 5 is my new favourite show. I love it. Whatever Dario Russo and David Ashby do next, I’ll be watching. And what better time to watch this Christmas extravaganza than this festive season?

(All images owned by Dinosaur production company, creators of Danger 5)

A previous version of this article appeared on TheSnootyUshers.com in October 2015