Tinseltown celebrates the best of the last year on tonight. Here’s our predictions of who will take home the Golden Statuettes in the technical categories.

Tonight’s the night as Hollywood crowns it’s best of 2018. Yesterday we looked at the acting awards, but right now The Cynical Cinephile himself, Glen, and myself are going to tell YOU who is going to be taking home the big prizes.
Best Picture:
Call Me By Your Name
Darkest Hour
Dunkirk
Get Out
Lady Bird
Phantom Thread
The Post
The Shape Of Water
Three Billboards Outside Ebbing, Missouri 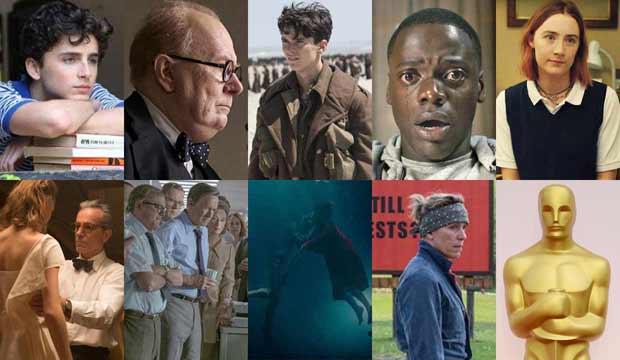 Who Do You Want To Win?
James: Shape of Water is an amazing film that I love almost as much as Pan’s Labyrinth.
Glen: I’d be delighted with The Shape of Water or Dunkirk winning with a third strong option being Three Billboards. Call Me By Your Name and Get Out are also timely and refreshing choices by the academy this year and wouldn’t be surprised to see an upset. Personally, I was not a massive fan of Phantom Thread or Darkest Hour despite some brilliant performances by the two casts but they just didn’t grip me as much as the other nominees. The huge issue I have though is the lack of Blade Runner 2049 which I just can’t grasp why it wasn’t nominated.
Who Do You Think Will Win?
James: Three Billboards Outside Ebbing, Missouri is an amazing piece of work that I think will just pip del Toro’s film and take the Best Picture award. And what a film it is. Moving and hilarious, with great performances throughout. McDonagh’s previous film Seven Psychopaths seemed like it was trying to be too clever (films that include a screenwriter character always tread a fine line), but this is a great film. Now let’s hope Warren Beatty and Faye Dunaway get given the right envelope this year.

Glen: I think The Shape of Water will take it this year. The most nominations this year and a heartfelt love letter to cinema; Shape of Water ticks pretty much all of the boxes for The Academy. Guillermo Del Toro is just a fantastic director and is deserving of the prize. Any other year Dunkirk or Three Billboards probably would’ve won but in 2018 it’s del Toro’s prize to lose.

Who Do You Want To Win?
James: Guillermo del Toro makes the types of films I would make if I had any type of talent or discipline.
Glen: I think people aren’t talking enough about how Christopher Nolan made Dunkirk. This is the as close to technical mastery one gets but I just don’t feel there’s enough buzz surrounding it and maybe be a case of not being as loved by the Academy as much as the other nominees. Delighted with the historic and well-earned nomination for Jordan Peele as he showed a surprising level of maturity for his directorial debut, the genre-blending horror hit Get Out. One unforgiveable snub this year is the insane lack of nominations for Denis Villeneuve’s Blade Runner 2049, which for me was easily in the top three movies of 2017. Villeneuve has now proven he is one of the best directors working today. Absurd to not see Martin McDonagh nominated for Three Billboards too.
Who Do You Think Will Win?
James: Guillermo del Toro. It’s great to see such variety on this list (five very different directors of five very different films) and I think he will bring this statuette back to Mexico to make it 4 Mexican wins in the last 5 years.

Glen: I think this year’s prize is Guillermo’s to lose. However, Nolan and possibly Peele may cause an upset.

Best Animated Feature Film:
The Boss Baby
The Breadwinner
Coco
Ferdinand
Loving Vincent
Who Do You Want To Win?
James: Loving Vincent to show that there is more to this award than family films. Not that I’m complaining, recent winners (and this year’s Coco) have been amazing films that go far beyond just being “kid’s films”.
Glen: Once again the Academy shuns a great Lego movie. Including The Boss Baby but not The Lego Batman movie is baffling and the lack of competition this year, to me anyway, shows that Best Animated Film should be dissolved and just have the Best Picture category. Just because it’s animated doesn’t mean it can’t be as good as other live-action movies.
The obvious winner, and deservedly so is Coco which was simply magical and miles ahead of any other animated feature this year.

Who Do You Think Will Win?
James: Coco. It’s great.

Glen: It has to be Coco. Easy!

Blade Runner 2049 (Roger Deakins)
Darkest Hour (Bruno Delbonnel)
Dunkirk (Hoyte van Hoytema)
Mudbound (Rachel Morrison)
The Shape Of Water (Dan Lausten)
Who Do You Want To Win?
James: Roger Deakins. The only major nomination for Blade Runner 2049, this will hopefully be the time he breaks his duck. I watched Fargo again recently, and he was nominated for his work there, and the sheer scope of his work on Blade Runner 2049, and how different those two films look is a testament to his skill.
Glen: I was consistently enchanted throughout Shape of Water and what van Hoytema did with Dunkirk is astounding but nothing dazzled me more than the legendary (and somehow Oscar-less) Rodger Deakins. Every single frame of 2049 is a meticulously crafted slice of grimy sci-fi perfection. This HAS to be the year Deakins finally wins. What does a cinematographer have to do?!
Who Do You Think Will Win?
James: Roger Deakins. Come on Academy, let’s stop being silly.

Glen: Deakins is rightfully the favourite but I could maybe be forgiving if van Hoyetma wins. If 2049 came out any other year then it’s his for the taking. 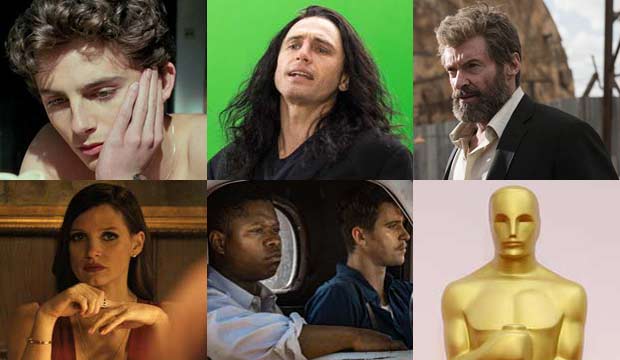 Who Do You Want To Win?
James: Logan. I thought The Lobster would be the oddest screenplay nomination I would see, but this was a real left field one for me. And I love the circular nature of the fact that the nomination mentions the previous X Men films. Technically that means X Men Origins: Wolverine. I also loved The Disaster Artist.
Glen: I’m delighted Logan got some recognition but I doubt it’ll be taking home any prizes. I think the understated beauty of Call Me By Your Name will be enough to secure the win over another great screenplay; the Disaster Artist
Who Do You Think Will Win?
James: Call Me By Your Name is a film that stays with you for a long time (there so have been a few of them this year) and the screenplay is the most important part of what makes it great (along with Timothee Chalamet’s face). I also think this will be the only award that CMBYN wins on this night.
Glen: I think Call Me By Your Name will take this one though. Never count out an Aaron Sorkin script though which was the strongest aspect of Molly’s Game.
Best Original Screenplay:
The Big Sick (Emily Gordon and Kumail Najiani)
Get Out (Jordan Peele)
Lady Bird (Greta Gerwig)
The Shape Of Water (Guillermo del Toro and Vanessa Taylor)
Three Billboards Outside Ebbing, Missouri (Martin McDonagh)

Who Do You Want To Win?
James: Three Billboards Outside Ebbing, Missouri is just so funny and moving, that even though The Shape of Water is my favourite on this list, I want to see Martin McDongh win.
Glen: These are all incredible screenplays and it’s very difficult to chose a winner but I think it should go to either the surprisingly great The Big Sick or Ladybird
Who Do You Think Will Win?
James: Three Billboards Outside Ebbing, Missouri should win, as it doesn’t seem like any of the other, smaller nominations have enough momentum to cause an upset. It reallybis an amazing script.

Glen:  I think it’s Three Billboards winning it this year. McDonagh is one of the best writers working in the industry today.