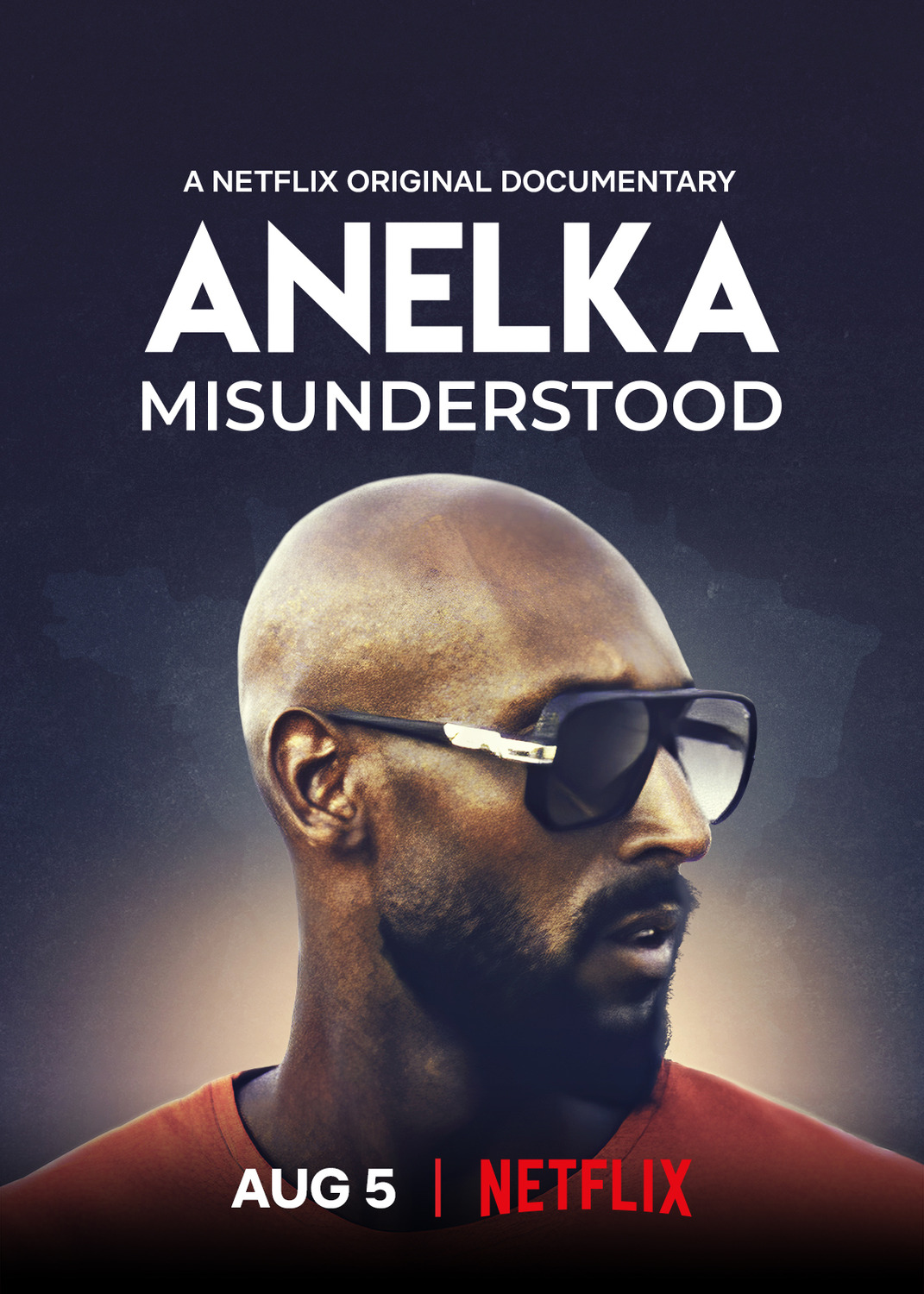 In the new Netflix documentary, Nicolas Anelka tells the story of his career. Is it worth your time?

In the late 90s, talented French forward Nicolas Anelka burst onto the scene. A career laden with trophies and big money moves followed, but so did lots of controversy. This documentary from Franck Nataf gives Anelka free reign to give his side of the story; to finally explain the real person behind the headlines that jumped from the back to the front pages.

Anelka: Misunderstood takes us from the streets of Trappes, outside Paris, to the beginning of his training at the IMF (the French Football Academy) in Clairefontaine. The platitudes flow from luminaries such as Paul Pogba, Thierry Henry, Patrick Viera, and writer Henry Winter (along with French journalists I’m not familiar with). Anelka moves to Paris St Germain at 16 to start his career, and we see the real beginning of the Anelka footballing story. Unable to get a guarantee of first team football at 17, Anelka moves to Arsenal, a bold move for such a young player. Success followed at Arsenal (including scoring twice in the FA Cup Final to clinch a historic Double), but after missing out on the 1998 World Cup squad at the last moment, Anelka bristles at being unappreciated and a victim of great injustice. A year later he decides he wants to move to a bigger club, and with Juventus and Lazio interested, Real Madrid pay a record transfer fee for him and he is off to join Los Blancos. A rather nomadic career follows, with goals a plenty at many teams, but with a nagging feeling of never quite fulfilling the potential.

Early on in the documentary however, there are already signs of what will be a repeated issue throughout Anelka’s career. Early on in his time at Arsenal, he had only been making the bench, and refused to get on the coach to go to an away game in Derby. Arsene Wenger had to talk to him for 20 minutes to get him to get on the team bus. An early injury meant Anelka was handed a chance, and he went on to set up two goals. I will leave it up to you to decide whether this proves Nicolas Anelka to be a special talent who would produce great performances with a bit of extra attention, or a petulant prima donna who demanded special treatment. Rather frustratingly, the documentary offers no counter-point to most of Anelka’s claims.

Later, after failing to settle in Madrid, Anelka wants to talk to the coach before training one day. The coach says they will talk after the training session, and Anelka’s response is to miss training, and the next day as well, despite the President of Real Madrid getting in touch with him personally. Similarly, when new France national team manager Jacques Santini comes to scout Anelka, he meets Anelka in the changing room after the match, and explains that he may not pick him for the next squad, because he does not know him. For Anelka, this is unacceptable. Again, prima donna behaviour, or a thoroughly justified reaction to a disrespectful snub, I leave the choice up to you.

My main problem with this documentary is actually with its subject. Nicolas Anelka is a good, but not a great player. He ended a long club career having played 671 games and scored 210 goals, and played 69 games for France, scoring 14 goals. He is the 16th highest goal scorer in Premier League history. He played more games for Chelsea than any other club, but I doubt any Chelsea fans would name him in any “Best Of” lists. When Thierry Henry calls Anelka “one of the greatest strikers in the world”, it is clearly a quote taken out of context, and trying to portray him as such rings hollow. And although there is a seriously impressive number of former teammates and players to talk about him, I think it is telling that there is no fan involvement.

Similarly, he is just not enigmatic, maverick, or outright famous enough for a him to need this type of carte blanche to tell the story of his career. He just seems like a private person who had a (justifiably) very high opinion of his own skills, who feels hurt (justifiably) by the press intrusion that accompanied his high profile career. For example – his move to Bolton Wanderers. After a few nondescript years at Fenerbahce, Bolton brought him back to English football. At Bolton, he played well, scored goals, and was very highly regarded. There were no front page headlines, no paparazzi, and he played things the right way, signing a new contract to allow Bolton to sell him for a bigger transfer fee for few months later. Unsurprisingly, this part of his career barely features in the documentary. Once you say that he struggled with authority and being told no, it pretty much sums up the whole documentary. He is also not self aware enough to explain himself properly, and the lack of any probing (or holding him to account for his actions) from the documentary-maker becomes rather frustrating. There are very brief moments of insight into the man from Arsene Wenger, William Gallas, and his wife Barbara, but they are few and far between.

There are two controversial moments that do deserve further examination in Anelka’s career. Firstly, in 2015 he was at West Brom, and after a good pre-season, he was brought off by manager Steve Clarke in the first game of the season, with the score at 0-0. To Anelka, this was a personal insult. Five defeats from the first five games saw Clarke fired. The first goal Anelka scored for West Brom soon followed the appointment of a new manager, and in celebration he gave a “quenelle” salute. This was a gesture made popular by Dieudonné M’bala M’bala, who had been condemned by the President of France a few days prior because of his anti-Semitic connotations. In fact, Dieudonné had already been convicted multiple times of anti-Semitic hate speech. Anelka claimed at the time that the gesture was done in support of his friend. In Anelka: Misunderstood, Anelka claims it was his way of telling Steve Clark to “shove it”. He claims that because he lived in England with no French television, he had no idea what he did wrong. His response to people who say he is anti-Semitic? “Prove it”.

The FA fined and banned Anelka, with the judgement that Anelka was not anti-Semitic, but the gesture was. For Anelka, this is a total vindication, and there is the suggestion in the documentary that the FA only acted because they were dealing with a lot of racial cases at the time. This is the part of the documentary that actually does Nicolas Anelka no favours at all. By allowing that much flawed logic to slide, uncontested, it becomes hard to take seriously as anything more than a puff piece.

(Also, if anyone has an ex-boss they did not get along with, I strongly urge you not to make an anti-Semitic gesture after they have left the business, I am not sure many HR departments will buy “the Anelka defence”.)

This lack of credibility becomes an issue in the last section of the film, when Anelka revisits the World Cup in 2010. Raymond Domenech recalled Anelka back into the French squad for the first time in three and a half years, for a friendly, and from 2007 onward, Anelka was a first choice, forming a partnership with Thierry Henry. In the run up to 2010 however, after some disappointing warm-up games, he wanted to leave because he knew things were going to go wrong. He is persuaded to stay by Patrice Evra and Thierry Henry. After a frustrating draw in the first game of the World Cup, France are 0-0 at half time in the second game when Domenech questioned his positioning. Anelka didn’t like it, because “he called me out by name as if I was guilty. As if I were public enemy number one. As if it were my fault. I took it as an attack… It was a big mistake. He had to know I was frustrated. He had to know that I was a volcano about to erupt.” That is a lot to read into a manager shouting at an under-performing player. Anelka reacted badly, was substituted at half-time, France lost 2-0, the French players refused to train the next day, and went on to lose the final game against South Africa, when a two goal victory would still have put them through. Anelka became the lightening rod for the criticism, as the French media claim that he swore and insulted Domenech. Anelka again feels entirely vindicated when Domenech admitted later that Anelka did not insult him with exactly the words that were printed in the newspapers. This is Anelka’s side of the story, and there is no-one to offer any dissenting opinion.

Nicolas Anelka lives in Dubai now, with this kids and wife. He has an idyllic life, and has done very well out of football and provided for his family by scoring goals for many different teams. Lots of his former team mates like him and he succeeded “despite having a knife at my neck for my whole career”. He undoubtedly sacrificed and suffered throughout his career, and is frustrated that he was never able to give his own version of the events of this career. He was a quiet and private man throughout his career, but I honestly don’t think this type of unchallenged hagiography does him any good. In fact it will probably underline everything the public already knows about Nicolas Anelka.

Like what you’ve read? Well I also talk nonsense on about film on the sport on The Sporty Ushers podcast, as well as film and TV on The Snooty Usher Podcast! You can find both THE SNOOTY USHERS and THE SPORTY USHERS on Spotify, Apple Podcasts, and just about anywhere you can get podcasts!